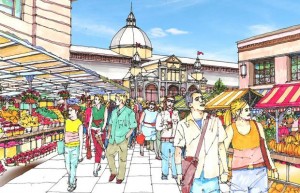 The constant controversy and opposition surrounding the redevelopment of the Lansdowne Park area is continuing to hit obstacles and is failing to gain the approval of Ottawa citizens.

Residents are worried that the plans for the project have not been represented factually, and the proposal always seems to change. Initially, the Lansdowne Mall section of the project was to be 232,000 square feet. The new plan shows this being even more massive at 408,000 square feet. Glebe, the community that will surround the development, is known for its neighbourhood atmosphere, independent shops, and historic charm. Residents are concerned that the plan will destroy the atmosphere of the town.

While many people do not mind the expansion focusing on more greenery, landscaping beautification and keeping the stadium as is, it seems as if the exact opposite is happening. Large commercial developments are in place, such as townhouses, condos, big-box stores, a 45,000 square foot cinema and a 40,000 square foot Whole Foods Market.

Local businesses are feeling threatened by the massive endeavour, perplexed at how they will compete with the new retail establishments. Places like the Mayfair repertoire theatre in Old Ottawa South, Loblaws and Metro grocery stores in Glebe, numerous specialty shops and the Ottawa Farmers Market may struggle in the presence of too many competitors.

Another issue is the ability of Glebe and the surrounding towns to sustain all the additional retail space, not to mention the parking nightmare that could ensue once the project is complete.

There are residents who are supporters of Lansdowne Live, and they are fighting hard for the changes, which they believe will impact the city in a positive way.

Contact Chris Coveny at OttawaMove.com or visit the FindMyOttawaHome page  to learn more about moving to and living in the Ottawa area.