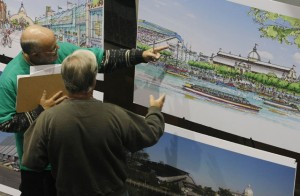 All the controversy surrounding the Lansdowne redevelopment has finally resulted in some modification plans, largely in the retail segment of the project.

As citizens have been debating whether big box retailers are necessary in the Glebe, with others opposing large shops in an effort to preserve the specialty ones that already exist, city councillors are currently reworking a compromise proposal.

It being indicated that a sizeable portion of the retail component will be absent from the new plan, as well as the number of restaurants, which may actually be reduced to zero. Residents wanted more effort to be concentrated on the park area, and so ideas about how to better leverage this space is being discussed. In addition, the 208-unit housing element of the project is now postponed until the current plan is finalized.

However, to meet the requirement of not passing any cost to Ottawa tax payers, the city proposed that retail companies would be the ideal answer as they would be charged property tax to the city, therefore offsetting the amount of the rebuild and mortgage on the stadium and Civic Centre. Now that retail is being shut down as an option, the current plan intends to replace it with a hotel and office space.

Overall, about 100,000 square feet of space is being deliberated by the city council and its staff. Although the citizens will get only some of their demands met, a fair compromise is being worked out so that the end result is something that the Ottawa and its residents will be happy with.

To find Ottawa housing or to reach out to a knowledgable realtor, contact Chris Coveny at OttawaMove.com

Is the Lansdowne Redevelopment Still a Good Idea?